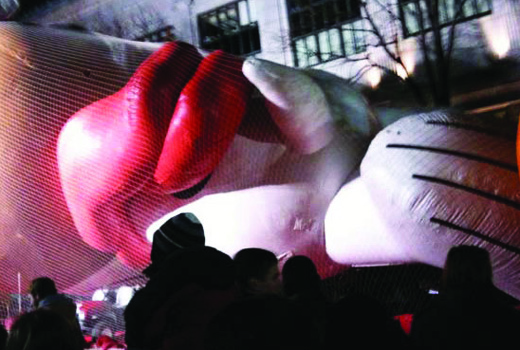 Notes on Seeing Inflation – the Night before the Thanksgiving Parade by Macy’s Department Store on Central Park West around the side streets of the American Museum of Natural History, November 24, 2010.

We know the parade well from many years as New Yorkers – watching it up close from the street, from seeing it from inside a friend’s apartment on Central Park West through sealed triple glazed windows, and, of course, from television with great close-ups.

And seeing the balloon characters in what they call “Inflation” the night before is astonishingly powerful, exciting, and fun. There are over a million people going. Lined up in massive streams along the sidewalks inching along in a slow shuffle, thousands of people are gently directed by police up the back Columbus avenue, across the street, back down the sidewalk behind the American Museum of Natural History, and then along the side streets of West 77 Street heading east to the park there are the balloons all blown up, laying down under thin white nets held by hundreds of sandbags.

At first it is wildly mysterious. You cannot tell which character each balloon is until a child shouts “It’s Shrek!” or you see a tell-tale signs that signal which character it is- Hey look the green foot of Kermit, the backpack of Dairy of a Wimpy Kid Greg Hefly, the brown flying cap of Snoopy, cobwebs of Spiderman, and the bright blue hat with a little thingy of Kool Aid Man.

The whole street becomes a horizontal wild wall. It is an abstraction of the kinetic energy of the fulfillment, the awakening from night sleep of the cartoon characters in the morning parade. The street is a still-life, at times gently moving in the wind, of giant soft form – pumped up colorful simple volumes expressing the life, the vitality, and the enormity of folk mythic volume at once real and fictive, but all true. 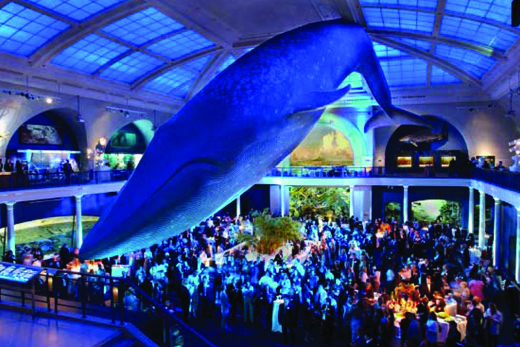 While shuffling along, one can’t help but notice the bright lights lighting the stunning pinkish brown stones of the American Museum of Natural History standing solidly in the middle of the double New York block. On second glance, one can’t help but refocus to realize that the throng we are in is the parade that night, that while the inflated cartoon characters lay in horizontal respite, we the throng are actually en parade – moving along while the big balloons watch us. Aren’t we the freaks – mere mortals – to their eternal mythos? Sponge Bob, Spiderman, Snoopy might outlive us all, forever, when we are all gone.

On third look – the other way to the museum, or the “Zooseum,” as our daughter, Femke, calls it, one again cannot help but be reminded of what is housed inside that massive stone building – a floating from the ceiling is a hugh whale – like a Macy ‘s parade balloon.!

Look – there are giant dinosaur skeletons running around in the front hall- African elephants lumbering in the dark, lions and tigers Indians and Eskimos, and wow, even an ancient Chinese tribes hunting and cooking whales in ice bound villages 3,000 years ago, a big ball for studying the stars, planets, and the universe. Then are also extraordinary research and production labs for studying natural history there and far, far away. We folks gawking on the sidewalk are caught between two worlds – the outside world of Macy’s parade of fictive, fantasy cartoon characters inflated for 1 day a year to launch Christmas sales at Macy’s –all in the name of good commerce and the inside world of the museum.

Then, and now, the parade changes with the recent addition in the past few years of what the Macy’s parade organizer, Robin Hall calls “high art” balloons. Ms. Hall says the parade is “a snapshot of American culture.” Along with the popular balloons, “there’s room in this parade for – and have always believed – for high art.” So with that the Macy’s parade has included annual inserts of high art including an upside-down balloon of Humpty Dumpty by Tom Otterness in 2005, a silver rabbit by Jeff Koons in 2007, and in 2008 a balloon buy artist Keith Haring of a Haring figure holding up a heart to mark what would have been the artists 50th birthday. And now, we have this year two inserted inflations, and maybe conflations by the Japanese artist Takashi Murakami of his two popular cat characters Kaikai and Kiki.

While the parade is supposed to mirror American culture, one has to ask why are Murakami’s two cats included when there are myriad other examples of characters, that mirror American popular culture today? And we have to also ask why high art has to be injected into what is an astonishingly popular, convincing, and thrilling work of both a commercial and pop nature that has become a truly reflective American folk parade – by anonymous people for the sheer pleasure for anybody and everybody. Leave the stars limply waving and sweetly smiling in their convertibles and on their floats from West 81 Street to Macy’s on West 34 Street so good old Santa Claus can be the star – the spirit of Christmas.

This is a little independent tabloid magazine looking into three expanding fields of Architecture, Not Architecture, and Not Not Architecture between ancient and future time and space.
View all posts by ZAPP URBANISM →
This entry was posted in ZU 24 and tagged American Museum of Natural History, balloons, Central Park West, Johanna Post, Macy's Thanksgiving Day Parade, New York City, parade. Bookmark the permalink.